Lately, I’ve been giving some thought to what seems to be the growing desire for novelty amongst a certain segment of craft beer drinkers. In many ways, it seems that the most active craft beer aficionados out there are the ones who are always eagerly looking for the next hot new brewery, the next new beer made with some great experimental hop, exotic ingredient, or wild barrel-aging program. In short, they are always searching for “the next big thing”.

First off, it seems to me that this is primarily an American phenomenon. In Europe, the vast majority of beer drinkers don’t seem to be driven by this constant urge for the new and different. I’ve visited cafes in Prague that had a grand total of one beer on offer. Granted, it was the classic Pilsner Urquell, deliciously fresh from the brewery, but how many American pubs could survive serving only one craft beer, no matter how delicious? When I lived in Britain from 1998 to 2001, I frequented many a pub that had only three beers on offer: an ordinary bitter, a best bitter, and a seasonal, all from the same brewery (since they were tied houses). No one seemed to be bothered by being offered the same three beers, day in and day out. Just serve me a well-kept pint of Young’s Special, and I’m perfectly happy.

But that’s not the American way, it seems. We’re always looking for the “new & improved” version. While the macro beers on offer from BudMillerCoors could certainly stand to be improved, the sales of many excellent established craft beers also seem to be suffering these days. Beers like Sierra Nevada Pale Ale are still fantastic, even if they don’t seem as “cutting edge” as the latest hazy IPA, hopped to 100 IBUs with some brand-new hop variety. While I’m still willing to try most any new brew once, lately I’ve been making a conscious effort to throw some of my limited beer budget toward some “old favorites”; in revisiting beers that I first feel in love with 30 years ago, I feel like I’m reconnecting with what got me interested in craft beer in the first place.

While I’m on the subject, let me say a quick word about the new plethora of beer apps, of which Untappd is probably the most popular. I will admit to having it on my phone and using it, but I’m beginning to think that such apps might be detrimental to truly experiencing and enjoying craft beer. If the drinker’s focus is on drinking a beer to earn another badge, rather than drinking the beer just to enjoy it, things may be headed in the wrong direction. It reminds me a bit of the “tickers” I saw in Britain. The people strove to taste and “tick off” as many new beers as possible. As hobbies go, I suppose it’s no worse than collecting stamps, coins, or butterflies, but it always seemed to me to miss the point of drinking a beer in the first place. The new apps seem to be turning us into a nation of tickers, rather than folks just enjoying beers for their own sake, be they old classic or new creations. So let’s put the phones down and just have a beer, shall we?

Stepping down off my soapbox and moving on to some news item, I first have to congratulate Kassik’s Brewery on its impressive double gold at the Great Alaska Beer & Barley Wine Festival last weekend. It’s 2016 Buffalo Head Barley Wine took First Place in the Barley Wine Competition, while its Statny Statny Barrel Aged Stout took the prize in the Winter Beer Category. Ballast Point’s Three Sheets Barley Wine took second, while 49th State Brewing’s Outlander Barley Wine took third. So a very impressive showing by Alaska brewers in general and Kassik’s in particular. If you weren’t at the Festival and would like to sample the winners, there will be an Awards Celebration at Kassik’s Brewery in Nikiski tomorrow, Saturday, from 2 to 6 PM. I’d get there early, as there are only 5 gallons of the  Statny Statny Barrel Aged Stout available. Kassik’s has also begun releasing its beers in 12 oz. six packs, starting with Morning Wood IPA and Beaver Tail Blonde Ale.

Also in the news was the announcement that Matthew Tomter, the owner ofEagle River Ale House & the Palmer City Ale House, has purchased the former Mat Maid Dairy building from the state to house the Matanuska Brewing Company. Here is the video of the KTVA Channel 11’s report on the purchase.

Tomter has ambitious plans. He said: “On day one we’ll be able to produce more beer than anybody, other than Alaskan Brewing Company, is producing right now. Our primary focus with this brewery is going to be 100 percent wholesale. We are going to produce beer, put it in cans and kegs, and send it straight to a distributor.” Currently, the brewery hopes to be open for business in November of this year.

Speaking of opening for business, Girdwood Brewing is expecting to receive its final shipment of brewing equipment soon and expects to be open by the end of March. Initial beers on offer will be IP-AK (the house IPA), Down the Chute(an easy-drinking Kölsch), and Hippy Speedball (a coffee stout).

I stopped in for lunch last week at Kenai River Brewing in Soldotna; the food from its new kitchen continues to be exceptional. I had the French Onion Soup (pictured below) which was perfect for such a cold day, then followed it up with that day’s special, a hearty meatloaf sandwich. If you haven’t eaten there yet, you are really missing out. 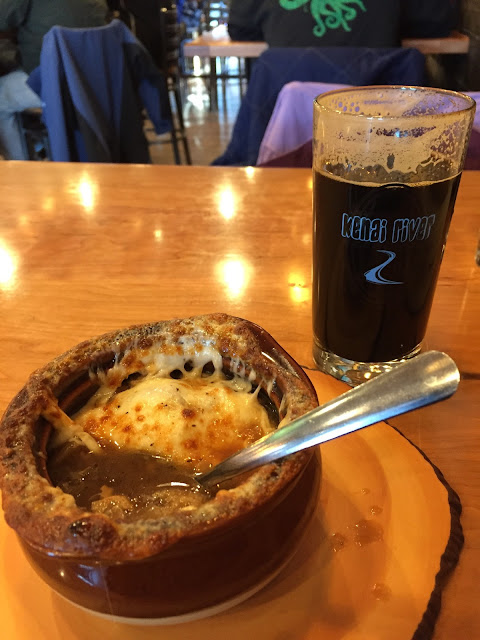 Finally, we are only three weeks away from the Frozen River Fest here in Soldotna, so it’s time to start making your plans. This year in advance of the Fest there will be not one but two beer dinners. The Flats will be again be holding its dinner on Friday night before the Fest; check out my 2/26/2016 blog if you’d like to see just how fantastic last year’s dinner was. In addition to The Flats’dinner on Friday, Kenai River Brewing will be hosting a dinner at the brewery on Thursday night. This is something Doug Hogue has wanted to be able to do for several years, so I fully expect it will be exceptional. Here’s the poster for the Fest itself; keep an eye on its Facebook page for more details about the dinners.

Enough news. Let’s do some beer reviews. I have three new brews to offer you this time round.

Cascade Lakes Brewing’s Salted Caramel Porter: This brewery is located in Redmond, Oregon. The beer poured dark with ruby highlights and a big, cream-colored head. The aroma was of caramel and roasted malt. Carbonation was good, but I thought it was a bit thin on the palate. The flavor profile was of caramel, coffee, & cocoa; good but falling off rapidly, so that there was little finish. Not a bad beer, but one that needs more “bottom” as the Brits would say. 5.8% ABV, 37 IBUs. 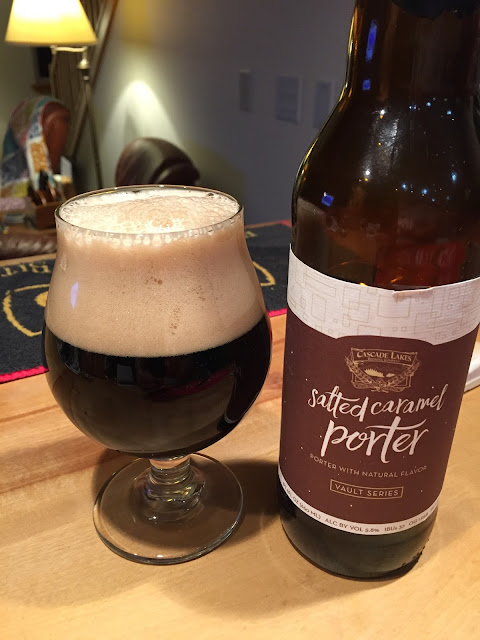 Ninkasi Brewing’s Noir Milk Stout: I’ve always been partial to this style, to the point of always keeping my home-brewed version on hand for my wife to cook with. Ninkasi’s version pours dark with semi-translucent ruby highlights and a nice mocha-colored head. The nose is mainly sweet notes from the malt and lactose/ The carbonation was good and the mouthfeel was light to medium. The flavor profile was a mix of the sweet malt notes and the coffee flavors, in a very smooth blend. Overall, a delicious beer and a worthy take on the style. 7% ABV, 60 IBUs. 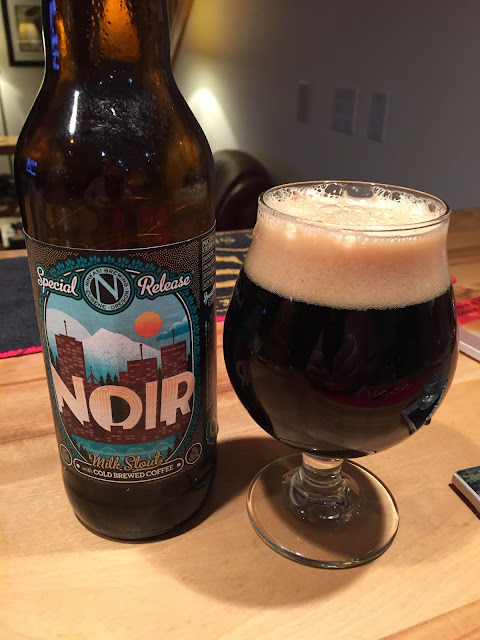 Alaskan Brewing’s Husky IPA: This is Alaskan’s latest seasonal release and its entry into the popular “tropical IPA” field, as it’s hopped with the popular Mosaic variety. It poured a clear gold with a nice white head. The aroma had lots of tropical fruit notes from the Mosaic hops. The carbonation was good and the mouthfeel was light. There was good up-front bitterness, then plenty of hop flavor and aroma. Overall, a nicely balanced, highly drinkable IPA; definitely not a palate-wrecker. 7% ABV, 58 IBUs. 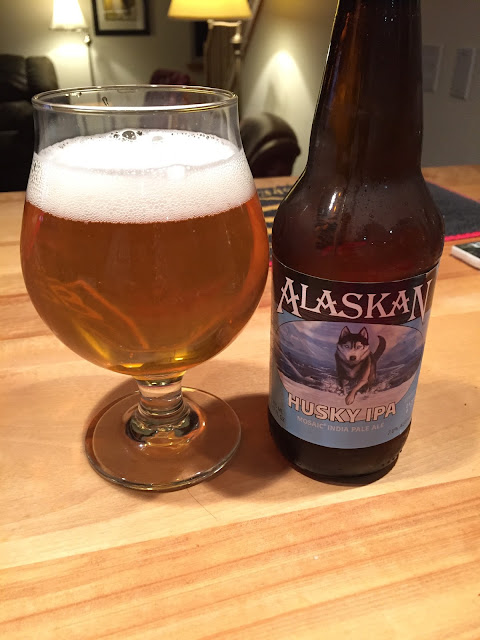 That’s about it for this blog. Remember, get out there and try some old favorites; don’t always be chasing the next big thing…

Until Next Time, Cheers!